Guided acoustic waves Acoustic as catalysts for the energy turnaround

Energy storage systems must meet constantly increasing requirements with regard to charging duration, durability and functional efficiency with rapidly changing energy requirements. In view of the growing importance of regenerative forms of energy in electricity generation, the fluctuation of charging and discharging processes and thus the desire for shorter charging times will increase. The re-availability and ageing behaviour of the energy storage device after a power consumption is mainly determined by its ability to absorb high quantities of electricity reversibly in the shortest possible time. The chemical reactions that take place when energy is stored in batteries, however, depend very much on the transport speed at the electrodes; here too, the electrochemical double layer slows down the transport of the charge carriers. As part of a research project funded by the BMBF (Förderinitiative Energiespeicher), ISAT is investigating how the electrochemical transport inhibitors at the electrodes of test batteries can be eliminated by guided acoustic waves. The aim of the project is the development of an additional acoustic component (“charging time booster”) with which rechargeable batteries can be equipped or retrofitted. 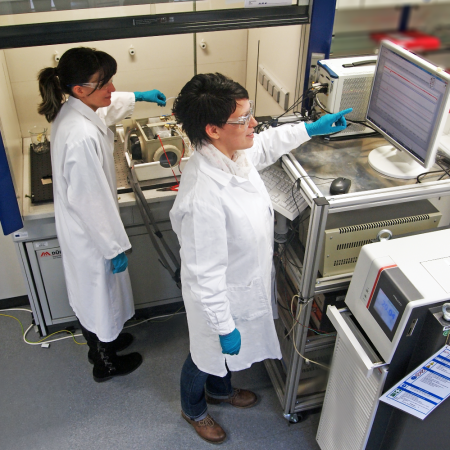 The investigations were initially carried out on commercially available lead sulphuric acid batteries, as these are currently still very frequently used as decentralised energy storage systems. In addition, they have a comparatively simple structure and the chemical processes taking place in them have been sufficiently understood. Lead batteries consist of negative lead and positive lead oxide plates which are separated from each other by separators. 37% sulphuric acid acts as electrolyte. The electrodes consist of a grid. In order to systematically investigate the influence of interfacial waves on the charging time of lead-acid batteries, a semi-automated test stand was set up to carry out defined charging and discharging cycles with and without acoustic coupling. The results obtained with this test stand show that surface waves can also be excited on the lead electrodes – despite the grid-shaped electrodes, the surface waves propagate over the entire electrode, which can be measured using a laser doubler vibrometer.

If one compares the charge curves of a lead acid battery without excitation of boundary surface waves on the electrodes with experiments in which boundary surface waves are excited, a visible influence on the charge curve can be determined. So far, charging times can be reduced by up to 10%. It is conceivable that the charging time could be reduced by around 25% by further optimization steps. ISAT is also currently working on the construction and commissioning of a redox flow cell and would like to transfer the knowledge gained to date to this innovative energy storage device of the future