Subproject ISAT: Influencing the transport of reactive species in the electrochemical coating process by means of acoustic surface waves

The project goal of InlinePlat is the development of a modular, fully automatic, high-speed electroplating module that can be integrated into mechanical production lines as a flexible manufacturing cell. In addition to the transfer of advanced automation, process control and IT solutions to electrochemical process technology, with which an industry 4.0 compatible manufacturing concept is implemented here, a novel approach to electrochemical deposition is also being developed. This combines a control of the transport of the reactive species out of the electrolyte by acoustic processes and the charge passage for metallic deposition by pulse plating. The acoustic processes differ from classical ultrasonic technologies by the use of so-called guided acoustic waves. These are excited directly on the workpiece surface by a sound generation unit to be developed in the project and tested in an industrial environment. Theguided waves excited on the workpiece surface induce a vortex flow at the boundary surface, which leads to a degradation of the transport inhibiting diffusion boundary layer. By combining the acoustic method with pulse plating methods, an increase in the deposition rate can be achieved by an adapted field distribution and an improved functionality of the layer. For the exploitation of the results, the new business model of performance contracting in electroplating is to be tested within the framework of a joint venture.

The aim of the ISAT subproject is to accelerate the galvanic deposition on metallic workpieces by means of acoustically induced vortex streaming at the electrode-electrolyte interface and to further develop the acoustic process acceleration with pulse plating. The acoustically induced flows are to be generated by excitation of acoustic boundary surface waves (so-called Scholte and quasi-Scholte plate waves (QSP waves)) directly on the workpiece (cathode) via a sound coupling device to be developed in the project. The excited interfacial waves are characterized by the fact that they propagate at maximum with the velocity of the surrounding liquid and do not decouple into the surrounding liquid. Due to the evanescent character of the waves, they remain bound to the workpiece and can propagate over long distances with low attenuation. The waves generate an “acoustic boundary layer” in the electrolyte itself. This “acoustic boundary layer” is formed in the area in which the electrochemical boundary layer is also formed, which is responsible for limiting the transport of the charge carriers. If the interfacial waves are excited with sufficiently high sound intensity, the energy transfer into the liquid near the electrodes is large enough to generate streaming (so-called Schlichting streaming) in the electrochemical boundary layer. The streaming causes a degradation or thinning of the electrochemical boundary layer, which increases the current density and accelerates the electroplating process.

In a further development step, the acoustic process is to be combined with pulse plating technology. For this purpose, the interaction between pulse plating and acoustic wave excitation will be systematically investigated and the operating parameters of both methods will be adapted to each other. The combination of both methods should significantly accelerate the deposition process and improve the quality of the coatings. The experiments to combine the acoustic process with the pulse plating process are carried out in close cooperation between the two institutes ISAT and Fraunhofer IPA.

In the second part of the project, the acoustic technology will be further developed into a sound unit consisting of a sound head and power electronics that can be integrated into a pilot plant. The aim is to upscale the acoustic components from laboratory scale to pilot plant scale in order to estimate the transferability of the technology to production systems. After completion of the trials in the pilot plant and the InlinePlat system, an initial estimate of the operating costs and an assessment of the industrial suitability of the process can be made. 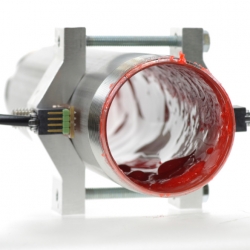 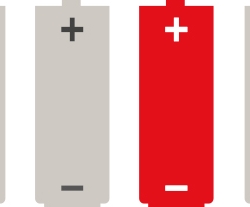